Nyesom Wike, the governor of the state of Rivers, has called a meeting of the state’s PDP officials and leaders.
Since the party’s presidential primary and the crises that ensued after it, this conference will mark the first in the state.
Although the meeting’s agenda was unknown, a source told our correspondent that party stakeholders in the state had not yet heard directly from the governor in light of recent events in the party at the national level.
Therefore, the parties anticipate hearing directly from the governor regarding his position and the PDP crisis’ next course of action.
Party officials, state executive council members, the party’s local government chairmen, and a few other people are expected at the meeting.
The crucial meeting, according to the source, was related to the recent party problem since the governor would inform his men of the decision his team made to withdraw from the party’s presidential campaign council.
This occurs before a press conference that Governor Wike is expected to give on Friday morning, September 23, 2022, at Government House in Port Harcourt.
The governor is rumored to have more to say about his dispute with Atiku Abubakar, the party’s presidential nominee, particularly in response to the latter’s statement on Wednesday.
In reaction to the Wike team’s decision in Port Harcourt, Atiku stated that Senator Iyorchia Ayu, the party’s national chairman, could not be forced to resign.
Following the results of the presidential primary and Atiku’s announcement on the choice of his vice presidential running mate, the governor, who felt deceived, had sworn to be transparent about some of the factors that had caused the crisis.
Wike is reported to have said, “Nothing has happened yet, but something will soon happen.”
Even though invitees are already making their way into government house as of the time of reporting this story, a statement is also anticipated to be released at the conclusion of today’s meeting, which begins at 2pm. 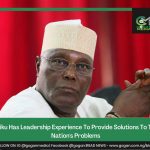 Atiku Has Leadership Experience To Provide Solutions To The Nation's ProblemsSeptember 22, 2022
Professor and Human Rights Activist Arrested For ‘Beating Orderly over House Chores’September 22, 2022 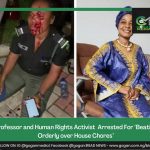 Police confirm kidnap of 5 in Katsina

WHO recommends use of masks in public, Nigeria records 29 new case of COVID-19