Over 20 governors elected on the platform of the All Progressives Congress and several other party chieftains arrived at the Jos airport on Tuesday with over 30 private and chartered jets to witness the presidential campaign inauguration of Asiwaju Bola Tinubu and his running mate, Alhaji Kashim Shettima.

Data obtained from aviation authorities showed that the Yakubu Gowon Airport recorded over 95 aircraft arrivals and departures of private and commercial planes which conveyed the APC bigwigs, top government officials, and other Very Important Personalities in and out of the Plateau State capital.

While about 17 private jets and helicopters arrived at the airport for the august political gathering, over 15 regional jets and turboprops also touched down in the aerodrome.

Findings show that the airport lacks adequate parking space for the high number of aircraft arriving in the state capital. As such, some of the aircraft were forced to fly to Abuja to park, which is just about 30 minutes flight from Plateau. It made it easier for the pilots of the VIP jets to return to pick up their passengers.

This was after an old and unused aircraft hangar at the airport was used for parking by some of the arriving aircraft.

Meanwhile, Tinubu’s presidential campaign was held inside Rwang Pam stadium with party chieftains expressing confidence that the party’s standard bearer would coast home to victory in the 2023 poll.

Our correspondent who was at the Jos airport observed the aircraft which brought dignitaries from different parts of the country to the state capital from where they were moved in motorcades to the Rwang Pam stadium, the venue of the campaign.

Also at the rally were the APC presidential candidate’s wife, Senator Oluremi Tinubu, and Hajiya Nana Shettima, wife of the vice-presidential candidate, who both addressed the crowd, and Dr. Ibijoke Sanwo-Olu, the wife of Governor Sanwoolu of Lagos, ministers, and members of the APC National Working Committee.

At the event, Buhari assisted by the APC National Chairman, Abdullahi Adamu, handed over the APC flag to the presidential candidate, who in his speech promised to neutralise terrorists and recalibrate the nation’s security architecture.

The President equally promised to lead the party’s campaign for the 2023 presidential election.

Before going to the campaign venue, Buhari was driven to the palace of the Gbong Gwom Jos, Da Jacob Gyang Buba, in the company of the APC candidate, the Director-General, Presidential Campaign Council and Governor of Plateau State Simon Lalong, Chairman of the APC Abdullahi Adamu, among others.

Buhari, during his visit to the Gbong Gwom of Jos reiterated his commitment to ensuring that every vote counted while urging party members to march to deliver the APC candidates now that the party had decided.

According to a statement by the Senior Special Assistant to the President on Media and Publicity, Garba Shehu, Buhari, said, “No election winner will be denied his mandate, irrespective of the party to which they belonged,” apparently in response to the Campaign Director-General, Governor Simon Lalong, who announced the intention to recreate the 1993 Moshood Abiola’s historic victory in 2023, in a campaign that took off in the same city 30 years ago. That election victory was annulled by the military.

Thousands of party faithful and supporters were also bused to the campaign venue.

Tinubu in his remarks said serving Nigeria is what he had always done and when elected, he would do more to build the economy, provide jobs, power, security, agricultural production and processing as well as the industrial revolution.

He stated, “We hereby reaffirm our commitment to progressive good governance and to the fruits that such governance can bring to this nation.   February 2023 is more than an election. It is a fight to define the soul of the nation and to determine our collective fate.

‘’Do we adhere to the ideals of broadly shared prosperity, competence, peace, justice and compassion toward all? Or do we toss these ideals away, lashing ourselves to the divisive politics of the past or to those whose ranting show they cannot distinguish between fact and fantasy?’’

To ensure overall energy security and resource mobilisation for the country, Tinubu promised to continue the ongoing exploration works in all frontier basins and especially speed up the development of the commercial oil find in Gombe/ Bauchi states.

He said, “Most importantly, I will give utmost priority to extinguishing terrorists and violent criminals. We shall augment our military, police and security personnel while providing them with better tactical communication and mobility. We will employ hi-tech aerial surveillance to track and attack these menaces.

“These evil forces seek to destroy our democratic way of life. I have news for them. We will defeat their destructive way of life. They shall be utterly defeated and vanquished from our soil.”

He thanked Lalong for leading the campaign as the director-general and hosting the flag-off which he described as successful.

The APC national chairman said Tinubu’s emergence as the party’s presidential candidate in a free and fair contest shows that he is an acceptable candidate to the party and Nigerians.

He, therefore, challenged the party members to work hard and ensure victory at all levels.

“Our victory is a done deal. We have no doubts that President Buhari will produce his successor. Let’s give democracy a chance”, he added, pointing out that Tinubu would build on the achievements of the President and ensure that Nigerians are provided with the best opportunities to thrive.

Former Governor of Plateau State, Joshua Dariye expressed confidence that Plateau and Nigerians would ensure APC and Tinubu’s victory at the poll.

Cross River State Governor, Ayade said that Buhari had done well in the past years and that it was important for the APC to produce his successor in order to continue the good work.

Governor El-Rufai who spoke in Hausa urged the people to support the APC presidential candidate to enable him to succeed.

He accused the opposition party of using ethnicity and sometimes religion to drag down the APC’s name and its candidates.

According to him, some people from the North hinted that they would not vote for Tinubu because he is not a Northerner, but he noted that the North would support what is right.

He stated, ‘’They said Asiwaju is not a northerner, and they will not vote for him. The people of the North know what is right, they are friendly, and he worked in Lagos, treated our people in Lagos very well, and supported President Muhammadu Buhari to become president twice.

‘’The President has presented his candidate, Bola Tinubu. Those who are saying that Tinubu is not from the North, do they love the North more than the President? When they ruled the country what achievement did they bring? Do not be deceived, this election is between good and evil, between developments and retrogression.

‘’When you allow them into power the North will be dragged backward again, and there will be suffering. They have spent eight years out of power, so the moment they are given the chance they will be back to embezzling with or without what to embezzle, they will embezzle. Therefore, do not be deceived, both the youths and women.‘’

In his remarks, Lalong said there is great excitement and expectation over the prospects of a Tinubu government which he said promises to serve the people and carry them along ‘’just as Mr. President has done over the years.’’

Vice Presidential candidate, Senator Shettima, Senate President Lawan, Progressives Governors Forum Chairman Atiku Bagudu and other governors in various goodwill messages assured that Tinubu and all the candidates of the APC would emerge victorious in the poll.

Addressing the rally, the Coordinator of the Tinubu Presidential Campaign, North-West, Governor Mohammed Badaru of Jigawa State stated, ‘’Today, God has beamed the light and the truth has been unveiled; the liars will begin to run. Seven years and a half back we promised you three things: to enhance security, revitalize the economy and fight corruption. These liars are just lying after destroying the country in the past 16 years and giving it to us.

‘’There was insecurity and God brought President Buhari. Out of about 16 local governments in Borno State in the hands of Boko Haram but they are now rescued. No government did what the president did in the area of security.’’ 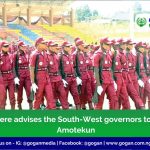 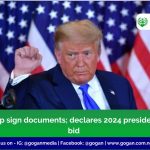 Exbition of the Picturesque City Views