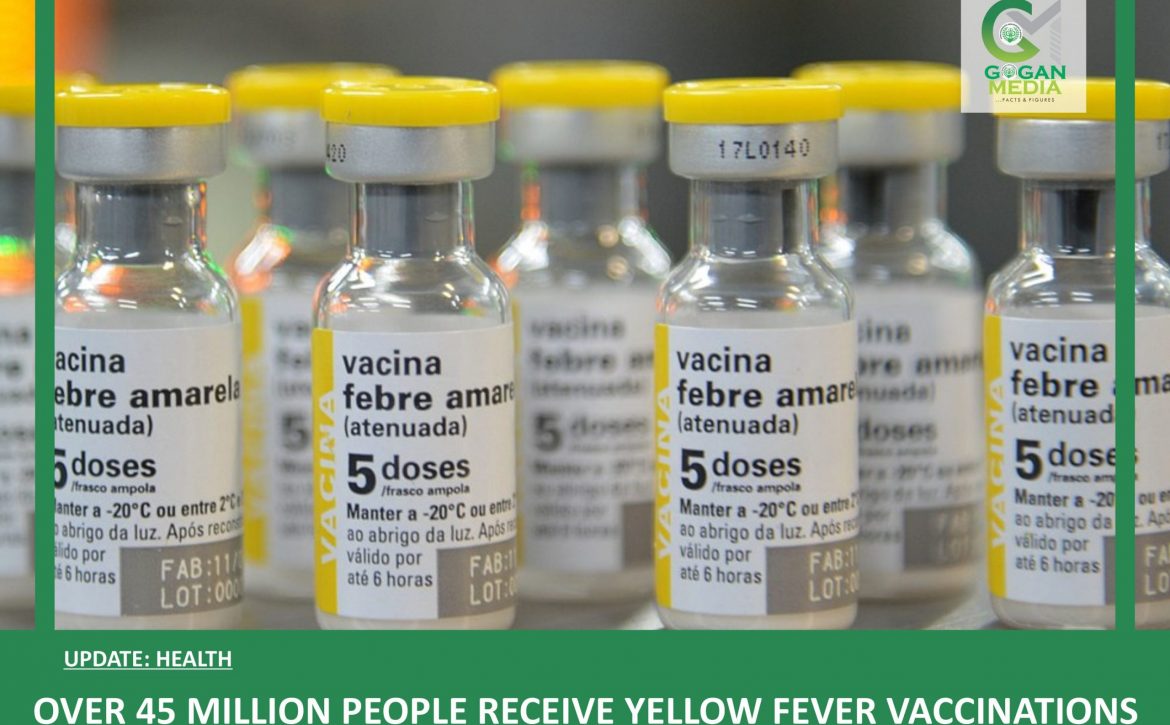 Over 45 million people receive yellow fever vaccinations in Nigeria during the COVID-19 pandemic.

The effects of yellow fever outbreaks in Taraba State and the global attempts to end yellow fever epidemics by 2026 are depicted in recent movies.
This is happening as Nigeria immunizes approximately 45 million individuals against the COVID-19 pandemic-related yellow fever virus.
“I lost my second child to yellow fever. It was a very traumatising experience for my family and I,” explains Muhammed Awal, a father of five from Taraba State. “We rushed the child to hospital when he started showing symptoms of the disease, and he died two to three days after, because his internal organs had been very damaged.”
In one of the two films produced by the Eliminate Yellow Fever Epidemics Strategy, or EYE, Muhammad discusses the tragedy that befell his family and his efforts to safeguard the safety of the other members of his family. With the use of a single shot vaccine that provides lifetime immunity, EYE hopes to safeguard nearly 1 billion people in Africa and the Americas by eliminating yellow fever epidemics by the year 2026.
Yellow fever outbreaks that killed people in Angola and the Democratic Republic of the Congo in 2016 and expanded to China warned the African continent that the disease was on the rise. In response, the World Health Organization, UNICEF, and Gavi, the Vaccine Alliance, formed the EYE Strategy alliance and selected Nigeria as a high-risk nation.
There are 160 million people at risk for yellow fever in Nigeria, which has a population of about 200 million. Around 25% of all Africans at risk fall under this category. A virus called yellow fever is spread by infected mosquitoes.
The World Health Organization’s Nigerian medical officer, Dr. Anne Eudes Jean Baptiste, explains: “yellow fever is dangerous because a small percentage of patients will go through a more toxic phase of the disease. By then they will experience fever, have system failure, mainly in the kidney and liver. They may experience bleeding coming from the mouth, nose and eyes and within 7 to 10 days, half of them will die.”
Nigeria, which has some of the most densely populated cities in the world, is susceptible to both urban and sylvatic (jungle) exposure to the illness. Yellow fever is spread by sylvatic exposure by mosquitoes that have bitten non-human primates and animals. These types of transmission are particularly dangerous for agricultural and mining workers.
After 15 years, yellow fever made a comeback in Nigeria in 2017. The cyclical nature of sylvatic transmission and gaps in disease detection rather than a lack of virus transmission are to blame for this. A better understanding of the disease’s distribution in humans is now possible because to increased monitoring and laboratory testing.
The Director General of the Nigeria Center, Dr. Ifedayo M. O Adetifa explains: “we have strengthened surveillance considerably. We have reference laboratories in the country that have been strengthened, and are being supported and assessed to make sure they are meeting all the performance parameters in terms of sample collection and referral to our reference labs in Abuja.”
“Despite the ongoing COVID-19 pandemic, we have given out over 66 million doses* in 2020 and 2021 to protect people from yellow fever outbreaks. This achievement has been possible through routine immunization, as well as mass vaccination campaigns that identify gaps in the population and proactively target vulnerable communities.”
Dr. Adetifa appears in a second movie that focuses on the global effort needed to keep Nigerians safe and records the launch of a vaccine campaign in Taraba State.
At the time of the filming, this figure was merely an estimate. 45 million people were really vaccinated as part of proactive and reactive mass immunization operations during the COVID-19 pandemic.