Buckingham Palace confirmed on Thursday that Queen Elizabeth II, the longest-reigning monarch in British history and an icon instantly recognizable to billions of people worldwide, has passed away at the age of 96.

Following the queen’s record-breaking 70-year reign, her eldest son Charles, 73, assumes the throne immediately in accordance with centuries of tradition, ushering in a new, less secure chapter for the royal family. 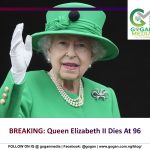