My daughter was pregnant with twins — Omobolanle Mother crys

According to news reports, Omobolanle Raheem, a female attorney, was carrying twins when she was fatally shot on Christmas Day in the Ajah neighborhood of Lagos by a bullet from an AK 47 service rifle.

This was revealed by her bereaved mother, Mrs Salami, yesterday, when the Lagos State Commissioner of Police paid a condolence visit to the bereaved family. “ She recalled in tears how she hawked oranges to train her in school “This is just as late Bolanle’s widower, Gbenga  Raheem,  narrated how he watched her gasp for breath until she passed on, on reaching the third hospital she was rushed to.

“Besides, President Muhammadu  Buhari, who condemned the act, has directed the Inspector General of Police, IGP  Alkali Baba, to take action against the killer cop.“This is just as the Lagos State  Attorney General and Commissioner for Justice, Moyosore Onigbanjo, SAN, informed that he would lead the prosecution team in the trial of the killer cop.“

During a condolence visit on the bereaved family by the Commissioner of Police, Lagos State Police Command, CP Abiodun Alabi, late Bolanle’s mother confirmed that  her daughter was pregnant.

Unable to hold back the tears , she wailed , “ I will not see my lawyer again. She has been taken away from me. She was pregnant with twins. She died with her glory, leaving a five-year-old baby behind.

Continuing in tears, she said, “ On Monday, my granddaughter came to me said, ‘grandma, Iju Ishaga, I saw you yesterday crying , was it because of my mummy?’, “I said yes. Then she came again and told me that ‘ Pastor Jerry said what God cannot do does not exist . So, grandma, stop crying  and she kissed me on the cheek.

“Just like that, she was taken away from me. Oluwagbenga (referring to the deceased’s husband), you won’t see your love.

“It is not easy. A child that I have been training since childhood. I suffered over her. I hawked oranges; there is nothing I did not do.” 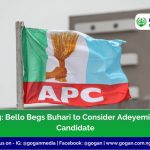 No UAE work permits were available for 539 stranded Nigerians – NEMA