The Katsina State Police Command’s agents foiled an effort by some kidnappers to terrorize commuters along the Sabuwa-Mararabar Yakawada road in the state’s Sabuwa Local Government Area.
According to sources, a police unit from the council stopped 30 terrorists who had stormed the road that day around 2.45 p.m. and were going to start their operation.
The sources went on to say that during the encounter, the police unit and the terrorist group engaged in a vicious gun battle that resulted in the death of one of the kidnapping gang members.
Four motorcycles and an AK-47 gun were found among the terrorists, according to the police.
On Thursday morning, SP Gambo Isah, the Katsina Police Command’s spokesman, verified the development.
He explained “On Wednesday, September 14, 2022 at about 2.45 p.m, a distress call was received that terrorists numbering 30, on motorcycles, armed with AK-47 rifles, blocked Sabuwa-Mararabar Yakawada road, Sabuwa Local Government Area of Katsina state, with the intent to rob and kidnap.
“On receipt of the report, DPO Sabuwa Division led a tactical unit to the area and engaged the hoodlums in a fierce gun duel. The team successfully repelled the terrorists from their heinous mission.
“In the course of scanning the scene, a terrorist was neutralized, one AK-47 rifle and four of their operational motorcycles were recovered. It is feared that many terrorists were neutralized and/or escaped the scene with gunshot wounds. Investigation is still ongoing.” 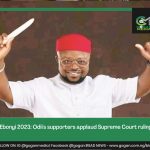 NEMA alerts Nigerians that floods may worsen in 2023