Depreciation of the Naira increases foreign debt by N9 trillion

Within the seven years under review, the naira depreciated by 52.52 percent against the US dollar.

The Monthly Average Exchange Rates of the Naira (Naira Per Unit of Foreign Currency) for 2015 document obtained from the website of the Central Bank of Nigeria shows that the one dollar was N196.92 for Inter-bank Foreign Exchange Market.

This showed that there was an increase of 288.18 percent in seven years, according to the external debt stock reports by the Debt Management Office.

A breakdown shows that in 2015, states had $3.27 billion in external debt while the federal government had $7.05 billion.

They also include debts from commercial sources, which include Eurobonds and Diaspora bonds.

If the CBN average exchange rate for June 2015 was used to weigh the country’s current $40.06 billion foreign debt, Nigeria’s external debt in naira terms would have been N7.89 trillion.

However, he noted that Nigeria could service its foreign debt at its current level, but a constant increase in debt without a corresponding increase in foreign currency earnings could put the country in a difficult position.

In a bid to manage the value of the naira, the CBN introduced several policies, such as stopping 41 items from accessing forex at the official market, offering N5 for every $1 of funds remitted to Nigeria through internal money transfer organizations, and banning the supply of forex to Bureau de Change, among others.

However, these policies have not been able to guarantee naira stability.

The World Bank has said it disagrees with the CBN on how it tries to achieve price stabilization of the naira, adding that the local currency should be allowed to respond to real pressures and not be bottled up by the CBN.

A Global Finance Report has also said that the CBN has failed to curb rising inflation and stop the naira from sliding against the US dollar.

The International Monetary Fund recently said that the long-term rate of the depreciation of the naira equated to a loss of 10.6 percent of its value annually since 1973.

According to the IMF, this rate was 1.5 times higher than the long-term rate of the currencies of other emerging markets and developing economies at 7.2 percent and sub-Saharan Africa at seven percent over the same time period.

The IMF said, “Its exchange rate underwent more persistent depreciation.” Nigeria’s long-term rate of currency depreciation (on average 10.6 percent annually since 1973) was 1.5 times higher than both EMDE (7.2 percent) and SSA (seven percent). “Given limited availability of long-term data, it is difficult to estimate the exact reasons.”

The Bank of America recently said Nigeria’s local currency unit was set to weaken further next year as its current exchange rate to the dollar was well above fair value.

According to a report by Bloomberg, “Three indicators, the widely-used black-market rate, the central bank’s real effective exchange rate, and our own currency fair value analysis, show the naira is 20 percent overvalued.”

“We see scope for it to weaken by an equivalent amount over the next six to nine months, taking it to as high as 520 per USD.”

During a workshop on tax expenditure organized by the ECOWAS Commission in Abuja, financial experts advised that Nigeria and other West African countries should move away from reliance on foreign assistance to finance developmental projects in the region.

According to them, overdependence on financial aid and external loans might affect long-term prosperity for the entire region.

The Special Advisor to the Director (Custom Union and Taxation in ECOWAS), Gbenga Falana, while emphasizing that the debt profile of most of the countries in the sub-region was mounting, stressed the need for West African countries to look inwardly and finance local projects through effective domestic resource mobilization.

Most experts who spoke with a source described the current situation as “naira devaluation,” rather than “depreciation.”

While depreciation is driven by demand and supply, devaluation is often a policy measure employed by the central bank to achieve certain economic outcomes.

A member of the Monetary Policy Committee, who spoke in confidence with our correspondent, said certain demand and supply factors were triggering the devaluation.

The source said, “The issue of devaluation is a function of demand and supply factors.” If the value of a currency is depreciating, it means the demand is greater than the supply.

On the issue of supply, he said that the country was not exporting enough and that foreign investments into the country were dropping.

“If we are having issues with supply, it is either because exports are not growing or because foreigners are not investing in the country.”

“Our export is mainly oil, but there are issues like sabotage in Niger Delta areas.” Our volume has not been increasing as it should, and then there is subsidy, as part of what we earn is also spent on subsidizing refined products.

“Also, our non-oil export is not growing, which means that we have not been diversifying the economy sufficiently to move away from oil to non-oil,” the source said.

The source also said that the pandemic, insecurity, and certain policies contributed to the devaluation.

He said, “Also, the pandemic has affected remittances, and there has been a decrease in capital flow, especially due to insecurity.” Foreigners are also not happy with the policies that we practice. There is risk in the system, which discourages investors. All of these contribute to the failure of supply.

On the issue of demand, the source said there had been the issue of people buying dollars to use as bribes and to keep. This, among other things, had led to more demand than supply, he noted.

“On the demand side, people demand foreign currencies to import raw materials, final products, or capital goods.” In Nigeria, we also see that the dollar has become the currency that people use to bribe. There are also those who buy dollars to keep them. “This makes the growth in demand higher than that of supply, affecting exchange rates over the year,” the MPC member said.

The source added that the government needed to restructure the economy, reduce dependence on oil, address the issue of oil subsidies, and control speculators buying dollars to keep.

On the economic side, he said the increase in imports over exports and illicit capital flows had been major reasons for the naira’s depreciation.

He said, “The devaluation is caused by both political and economic issues.” The economic issue is that we continue to import goods and are not exporting much beyond oil. Also, the non-oil sector is not doing very well, and we are still importing more.

“There is also the issue of illicit capital flow.” That is, people taking foreign currency without caution. “The coronavirus has also affected output.”

He also said that the CBN had been intentionally devaluing the naira in order to increase the funds given to state governments.

“On political grounds, the CBN, probably with collusion from the Ministry of Finance, has been devaluing the value of the naira officially to increase the amount of naira given to the state government.”

“The official devaluation of the naira has taken place twice, and that is a political thing.” “They are doing it to satisfy fiscal expenditures,” he added.

He urged the government to address these issues to achieve naira appreciation.

A professor of economics and public policy at the University of Uyo and chairman of the Foundation for Economic Research and Training, Prof. Akpan Ekpo, condemned the intentional devaluation of the naira by the CBN.

He said, “When you devalue, you are hoping that the goods you export will be cheaper.” You can export more and earn more revenue. However, our major export is crude petroleum, and we don’t control the price or output. “So, we don’t get anything from the government’s outright devaluation.”

Ekpo urged the government to boost production and ensure the country had a strong, productive economy.

“The only way we can stop the devaluation of currency is through production.” We need to produce more goods and services and export them to earn foreign exchange. That is our basic problem in Nigeria: we consume what we don’t consume.

“The government needs to build an economy that is strong and doesn’t rely on one commodity,” he told our correspondent. 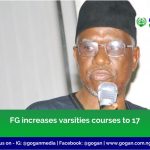