CBN: $200bn Forex to be earned from Non-oil Commodities

The Central Bank of Nigeria (CBN) has declared that its RT200 policy has begun to attract more commodities into the Nigerian export ledger just as the United Bank for Africa (UBA) has revealed that 200 exporters accounted for 95 per cent of the $4.2 billion Nigeria earned from non-oil export in 2021.
The CBN’s RT200 FX program intends to generate $200 billion in forex profits from non-oil proceeds over the following three to five years. The Non-Oil Export Proceeds Repatriation Rebate Scheme serves as a significant program pillar.

The apex bank highlighted that a record number of companies in the solid mineral market had entered the market as a result of the strategy that encourages export earnings.
Mrs. Anne Nnenna Ezekannagha, the Principal Manager of the CBN’s Trade and Exchange Department, made the announcement yesterday in Lagos during the organization’s annual workshop on the theme: “Boosting Domestic Capacity for Sustainable Export Earnings.”

In addition, the United Bank for Africa’s (UBA) deputy managing director, Mr. Muyiwa Akinyemi, said that only 200 exporters were in charge of 95% of the $4.2 billion in non-oil exports that the nation made in 2021.
Informal exports, which are mostly in wholesale dealing in select industries including information technology, entertainment, and solid minerals, were not included in the $4.2 billion registered in 2021.

Ezekannagha said: “RT200 is an initiative that was launched by the CBN and is currently, anchored on our rebate scheme. So, the idea is that we want to encourage exporters to repatriate their funds. A lot of exporters do not repatriate their funds and the RT200 is to encourage the repatriation of non-oil proceeds.
“We have seen a significant improvement not just in the figures that are being repatriated, but also in the number of exporters that are willing to come to the formal sector. Because a lot of our export has been happening informally, but with this scheme, we have found that a lot more players in the export sector are willing to come to the formal sector.

“So, we are also noticing not just the increase in the figures but also in the increase of the commodities that we are exporting that was reported earlier. Like the solid minerals, we are seeing more in the solid minerals and we are seeing more players in that sector, coming into the formal sector to report their exports and participate in the RT200.”

Also speaking while presenting his paper titled “Boosting Domestic Capacity for Sustainable Export Earnings- the UBA Perspective, Akinyemi said: “Top 200 non-oil exporters control over 95 per cent of the $4.2billion of the industry volume in 2021.” He added that the federal government had projected to increase foreign exchange earnings from non-oil to $200 billion within three to five years.
He also disclosed that “major items of non-oil exports including cocoa, cashew, sesame seeds, hibiscus, fertilisers/chemicals, tobacco, hides and skin accounted for 85 per cent of total export.”

Akinyemi stated that the UBA “facilitated $1.34 billion (31 per cent) in non-oil export volume in 2021,” saying that the feat confirmed the UBA’s status as Nigeria’s number one export bank for three years running.

The Managing Director of the Fidelity Bank, Mrs. Nneka Onyeali-Ikpe, advised Nigerian commodity exporters to transition to the export of value-added processed commodity items to earn more foreign currency and enhance Nigeria’s trade balance in her keynote address during the workshop.
Onyeali-Ikpe asserted that switching to exports of value-added goods would boost revenues right away, even in the absence of increased supply of primary commodities.

Moving from cocoa beans to cocoa butter or powder and from raw cashew nuts to kernels, she claimed, would increase the foreign exchange earnings Nigeria receives from these products.

According to her, “most of our raw cashew nut exports go to Vietnam where more value is added to it and then re-exported. In 2020, Vietnam imported $1.5 billion worth of raw cashew nuts from Africa, added value to them and exported $3 billion worth of processed kernels. The uplift of $1.5 billion represents jobs and tax revenue opportunities that we could have created if this value addition was done in Africa.”

Onyeali-Ikpe, who was represented by a Divisional Head in Fidelity Bank, Mr. Isaiah Ndukwe, said: “At three times increase in revenue, Nigeria can move cocoa exports to $3 billion per annum (currently about $1 billion) and cashew to $600 million (currently about $200 million) in the short term to medium term. “If we then double the capacity of our plantations as well as processing capacity, we can exponentially move the numbers.

“This is not a reinvention of the wheel; it is a tried and tested lever for sustainable economic development. This is the same model that was used by the Association of South-East Asian Nations (ASEAN) i.e. Malaysia, Indonesia, Thailand and Vietnam to transform their economies into global manufacturing powerhouses.”

In a similar vein, Mr. Lamido A. Yuguda, Director General of the Securities and Exchange Commission (SEC), noted that by luring more foreign portfolio and direct investments, the Nigerian capital market had a significant role to play in contributing to the nation’s sustainable foreign exchange earnings.
Yuguda stated that there are four key concepts that the 10-year Nigerian Capital Market Master Plan (2015-2025) was based on, one of which is to “promote competitiveness by establishing practices that improve transparency, efficiency and liquidity and to attract sustainable interest in the capital market from domestic, as well as foreign investors and participants.”

“These are not the kinds of statistics we want, but they have been brought about by sustained forex illiquidity concerns which have resulted in many foreign investors pulling out of the Nigerian market, leading to the decline in foreign participation in the equity market.

“But we believe that implementation of the roadmap for vibrant commodities trading ecosystem in Nigeria by the commission will support the development of the agricultural sector and diversification of the Nigerian economy and ultimately, advance the country towards attaining sustainable foreign exchange earnings.”
Other participants at the workshop included the representatives of the Central Bank of Nigeria, the Bank of Industry, Nigeria Export and Import Bank and the Nigeria Shippers Council amongst others.

The Chairman of FICAN, Mr. Titus Nwokoji, in his welcome remarks called on the government to provide incentives to the non-oil exports sector, which “holds a lot of potential for significant growth provided there is a lot more attention from policymakers in terms of enabling reforms and regulations to support value-addition activities and generate employment.

He said: “To optimise and sustain growth in the non-oil sector so that it can contribute significantly to government revenue rather than solely to GDP growth, consistent and supportive export promotion policies that will improve the business operating environment as listed below are required.” 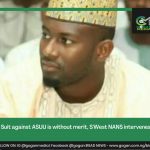 Suit against ASUU is without merit, S'West NANS intervenesSeptember 18, 2022
Biden says U.S. forces would defend Taiwan in the event of a Chinese invasionSeptember 19, 2022 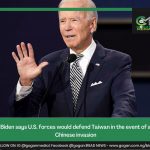 Nigeria’s problems can only be solved by traditional institutions – Oluwo