As he departed Downing Street for the final time as the British prime minister to submit his resignation, Boris Johnson on Tuesday pledged unwavering support for his successor Liz Truss.
Before leaving for an audience with Queen Elizabeth II, Johnson, whose term was dominated by Brexit and Covid and ended in scandal, said goodbye to cheers and clapping from his fans.
In a typical rhetorical flourish, he likened himself to “one of those booster rockets that has fulfilled its function” and would splash down “in a remote and obscure corner of the Pacific”.
But he made the following promise: “I will be supporting Liz Truss and the new government every step of the way.”
Additionally, he urged Truss’s Conservative party to put aside its disagreements in order to address the energy problem, which is expected to dominate his administration in the near future.
“If Dilyn (his dog) and Larry (the Downing Street cat) can put behind them their occasional difficulties then so can the Conservative party,” he added.

The transition of power in Britain often takes place quickly, with the outgoing and new leaders making fast trips to central London’s Buckingham Palace.
But Johnson and Truss must travel 1,600 kilometers (1,600 miles) round way to the Scottish Highlands’ isolated Balmoral residence for the head of state.
Due to ongoing health concerns that have made it difficult for her to walk and stand, the queen decided not to return from her yearly summer vacation in time for the brief ceremonial audience.
According to royal authorities, Johnson is scheduled to arrive at Balmoral at 11:20 am (10:20 GMT), while Truss is scheduled to arrive at 12:10 pm.
She will urge Truss to form a government during the meeting, which should last for about 30 minutes. Truss is the head of the biggest party in parliament.
After a long campaign that kicked up in July, Truss, 47, was declared the victor of a vote among Conservative party members.

Her arrival back in the British capital and her inaugural speech as prime minister are planned to take place on Tuesday afternoon, weather permitting, outside 10 Downing Street.
Storms and heavy rain are predicted, symbolizing the bleak economic climate that she and her new senior ministers will have to deal with right once.
Before she hosts her first cabinet meeting and takes questions from lawmakers in parliament on Wednesday, the selections are expected to be completed.

Kwasi Kwarteng, the business secretary, is anticipated to take over as finance minister, while James Cleverly will handle foreign policy and attorney general Suella Braverman will take on the challenging role of home secretary.
If confirmed, it would mark the first time ever that there are no white men serving in any of Britain’s four top cabinet positions.
Given that the UK is suffering from its worst economic crisis in decades, Truss has a hefty to-do list.
A recession is expected when winter sets in and inflation is out of control, peaking at 40-year highs of 10.1%.
Gas and electricity costs will rise by 80% for households starting in October, while businesses have been warned that even greater increases could cause them to fail.
Even though there have been warnings that more borrowing could worsen inflation, Truss, who describes herself as a free-market liberal, has promised tax cuts to spur growth.
On Tuesday, the British media reported that she will freeze energy costs.
The more cautious stance of Rishi Sunak, her defeated challenger for the leadership position, has caused another division in the Conservative party, which was already split over Johnson’s departure.
Recent polls indicate that a sizable portion of the British populace lacks confidence in her capacity to address the cost-of-living crisis.
Only 14 percent of people, according to a recent YouGov poll, think Truss will perform better than Johnson.

Johnson, 58, is still well-liked by grassroots Conservatives for being the charismatic election victor who led the nation out of the European Union.
Johnson is reportedly miffed about leaving despite being subject to numerous allegations of favoritism and corruption during his time in office and receiving a record-breaking police fine for violating his own lockdown regulations.
It has been suggested that he might wait to make a comeback, particularly if Truss finds it difficult to resolve the nation’s many issues.
On Tuesday, Johnson said he would “return to his plough”, like the Roman statesman Cincinnatus, although Latin scholars were quick to point out that he eventually returned to politics.
Truss declared victory in 2024 in her triumph speech on Monday, ruling out seeking the public’s approval in an early general election. 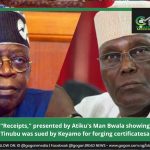 "Receipts," presented by Atiku's Man Bwala showing Tinubu was sued by Keyamo for forging certificatesSeptember 6, 2022
In the midst of the Ukraine War, Putin Participates in Military Training with Chinese ForcesSeptember 6, 2022 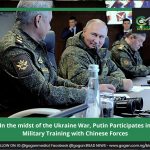