Alhaji Atiku Abubakar, the Peoples Democratic Party’s presidential candidate, reiterated his commitment to reestablishing Nigeria’s leadership position in regional security and development on Thursday.
Atiku gave the assurance, according to a statement from his media office, when he met with the 19 ambassadors of the European nations and the ambassador of the EU Mission in Nigeria on Thursday in Abuja with a delegation that also included his running mate, Dr. Ifeanyi Okowa, and the PDP National Chairman, Dr. Iyorchia Ayu.
Atiku was reported in the statement as stating that the benefits of the foreign policy that was followed by the previous PDP administrations have been undermined by policies of the last seven years, such as the shutting up of the borders.
He declared that regional security and cooperation will improve while he was in charge. 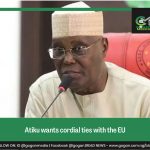 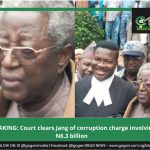 Lagos and Port Harcourt could see a “weather catastrophe” – FG

2023: Plots to Disrupt Our Programmes Won’t Deter Us – PDP