Former Theatre Commander, Operation Lafiya Dole, retired Maj.-Gen. Rogers Nicholas, has charged officers of the Nigerian Army to aspire to be fighters, not political officers or those seeking economic gains.

Nicholas gave the advice during the decoration of Brig.-Gen. Anyanwu Osuagwu at the Army Headquarters Department of Civil Military Affair, on Thursday in Abuja.

According to him, army work is about fighting, as such every officer and soldier must strive to excel in fighting to defend the interest of the country.

He described the newly decorated general as a complete soldier who had given his best in the fight against insurgency in the North East.

Nicholas said Osuagwu had commanded the most dreaded operations across North East, as well as being a fighter in one of the dangerous fronts in Sudan.

“You have been a fighter and I expect every officer to be a fighter particularly now that we have series of security challenges in this country.

“Every officer must be a fighter and must buckle up to be a thorough bred fighter to see how to contribute to solving the problem of insecurity in Nigeria because we are in a total mess.

“These guys have messed us up, so we must fight to make sure that we restore the dignity of the military and of this country,” he said.

Nicholas advised Osuagwu to remain committed to his duties, and be loyal and humble in his new rank.

The Chief of Civil Military Affairs (Army), Maj.-Gen. Markus Kangye, said the elevation of Osuagwu to general was well deserved, adding that the senior officer had an excellent performance record in the field.

Kangye said the officer was also hard working, dedicated and disciplined, urging him to remain focused in discharging his duties.

He said that higher rank meant higher responsibility, urging him to continue to profess knowledge, courage, and character in the course of his duties.

He also enjoined officers posted to other formations to remain loyal and dedicated in their new assignments. (NAN) 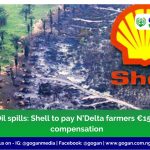