Presidential candidate of the ruling All Progressives Congress (APC), Asiwaju Bola Ahmed Tinubu, in London has taken to the social media to prove himself medically fit.

In a video he posted on Sunday night, Tinubu was seen riding a stationary bike at a gym, saying contrary to rumours that he was down in health, he was strong, hale and hearty.

Tinubu had fly out of Nigeria to the United Kingdom, sparking speculations that his trip may not be unconnected with a severe health condition, especially when he was conspicuously absent at the signing of Peace Accord by all the presidential candidates and their political parties.

But in a video, which he posted on his verified Twitter handle, Tinubu also left a short message, sayin, “Many have said I have died; others claim I have withdrawn from the presidential campaign. Well… Nope.

“This is the reality: I am strong, I am healthy and I am READY to serve Nigerians from day one”

Rattled by reports of his alleged medical condition, the campaign team of the APC had dispelled the rumour, noting that Tinubu was healthy.

Speaking on a fake social media photo suggesting that Tinubu was indisposed, the director, Media and Publicity, of the APC presidential campaign council, Bayo Onanuga, stated on his Facebook page: “Look at the frame of his glasses. It is certainly not Tinubu’s trademark frame. Let me assure Nigerians who genuinely want to know Tinubu’s whereabouts. He is in London, in his house.

“Tinubu left Nigeria on Saturday night for a short break and in readiness for what will certainly be a gruelling campaign.

“I saw him and spoke with him two hours before he left. He was hale and hearty. He was not ill. He didn’t go to treat any ailment.” 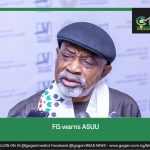 Guber polls to hold November 11 in Bayelsa, Imo, and Kogi