16,000 liters of stolen petroleum products have been detained by the Nigeria Security and Civil Defense Corps in Cross River.

The majority of the stolen goods, known as automotive gas oil or diesel, were reportedly buried in drums and gallons at trailer parks throughout the state, according to Mr. Samuel Fadeyi, commandant of the state’s NSCDC.

The search was required, according to Fadeyi, who told reporters on Monday in Calabar as he examined the petroleum products that had been confiscated, after receiving a warning from the NSCDC Commandant General that some illicit activities were taking place in parks.

He claims that when they visited trailer parks in Cross River, they found that hawkers had hidden and stashed a lot of petroleum goods in drums.

We have seized over 16,000 litres of AGO from various locations across the state in the last two weeks.

We encountered a lot of hostility in some of the sites we visited, so we made sure to disable the criminals’ ability to carry on with their criminal activity and swiftly leave the area to prevent human casualties.

Some of these street vendors operate like cartels; when they spot security personnel, they fight and flee, but we make sure to seize the goods, he said.

Fadeyi went on to say that he had requested a meeting with the unions and the leadership of the parks due to the harm the hawkers’ acts were doing to their reputations.

He said that the operation wasn’t a witch hunt but rather aimed at sending a strong message due to the hawkers’ detrimental effects on the environment and the nation’s economy through smuggling and adulteration.

He applauded Sector 4 of Operation Delta Safe and the Nigerian Navy Ship Victory for cooperating with the corps throughout the operation to seize and apprehend petroleum product traffickers traveling from Nigeria to Cameroon. 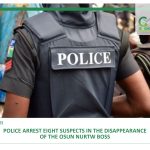 Police arrest eight suspects in the disappearance of the Osun NURTW bossAugust 23, 2022
Workers in C/River protest the alleged non-payment of five years' worth of wagesAugust 23, 2022 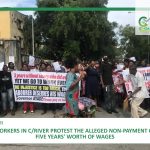